A few months ago Tony Hsieh set up an opportunity for me to take a tour of the Downtown Project in Las Vegas. This is a massively ambitious effort dedicated to transforming downtown Las Vegas into “the most community-focused large city in the world”. I walked away from the experience excited about… and a bit jealous of… the future of downtown Las Vegas. In fact, this tour is what inspired me to create Trucks and Tech and take a more active role in the development of Orlando’s tech community. 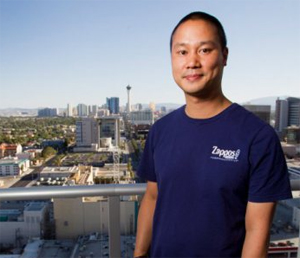 Tony and his team are true visionaries. They are empowering a new generation of entrepreneurs to rethink and reinvent the way they work and play. They have already created 454 new jobs and the project is still in its nascency. I followed up with Kim Schaefer of the Downtown team to get the 2 minute lowdown for my readers.

What was the inspiration behind the downtown project?

When Zappos announced their move to their new headquarters, Tony and several other Zappos team members decided to make the move Downtown–they had actually been hanging out down here for quite some time. But they had also been talking a lot about what their new campus would be like. They decided that rather than creating a really cool, but insular campus that had all of the amenities employees would ever need, it would be interesting to turn that idea inside out. Downtown Project was born from that idea. How could the entirety of Downtown be helped by the new influx of people and activity.

What makes Vegas so special?

Las Vegas was for a long time the fastest growing city in the country. Because that growth happened in a very condensed period of time, there was a resulting sprawl that occurred. That sprawl can lead to a disconnect between people in a community. The area we are helping to revitalize was once the vibrant core of our city, a place where families came to shop, dine, and meet with friends. It’s our hope that the neighborhood can return to that vibrancy and once again be the heart of the city for the people who live here–not just Downtown residents, but all residents of our city.

You have raised $350M so far, where did it all come from?

The $350 million is a private investment from Zappos CEO Tony Hsieh.

What startups are part of the program?

Tech startups are important to us because we believe you change the world with a laptop. As opposed to a brick and mortar operation, in which we are also investing, tech startups can rapidly scale, creating jobs and helping to further diversify the Las Vegas economy.

Why is coworking so important to the downtown project?

Coworking is a great way to accelerate learning and innovation. It allows technologists and entrepreneurs opportunities for serendipitous interactions, which we call collisions, to interact in a casual way where they can learn from one another, collaborate with one another, and support one another as they grow their businesses. We’ve invested in a coworking space called Work In Progress that also offers its members support in the form of classes, talks, office hours with experts, and mentorship to help them scale.

If you are ever in Las Vegas and have some time to broaden your mind I encourage you to reach out and try to schedule a tour with the Downtown team. This experience beats any show you can see on the Las Vegas strip! I promise you will walk away energized and driven to become more involved in your local community.