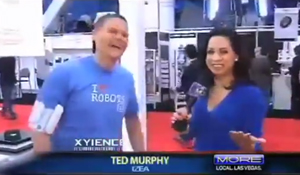 Every year technology and marketing professionals from around the world meet in Las Vegas for the Consumer Electronics Show (CES). CES was originally a trade show exclusively for consumer electronics professionals, but has since grown to a much larger event that encompasses all things social, internet, marketing, electronics and everything in between. While the show technically isn’t open to the public, the reality is that it isn’t too difficult to get a pass if you really want to go.

I have been attending for the past four years and providing television commentary for FOX. I have the pleasure of roaming the show floor to find the next big thing and I will be out there again this week. Here is what I am looking forward to seeing so far, but I am sure there will be more product announcements as the week goes on.

Google and Audi have leaked plans to announce a new car entertainment system at the show. It is speculated that this new system will use Google’s Android OS and will be available in the new Audi’s in 2014. The Audi/Google system is still in development stages, and details are expected to emerge this week. This is exciting news for app developers and will create an entire new economy around in-vehicle infotainment. Now…. when will we see iOS running in vehicles?

Sony is focusing on 4K technology, hinting that they will announce Ultra HD enhancements in smart phones, laptops and camcorders. Samsung’s will be showcasing their 105” curved 4K televisions with an 11,000,000 pixel resolution. Other oversized televisions will also be on display from LG and Samsung. 4K streaming technology will be presented for both Netflix and YouTube. Netflix has plans to include 4K capability into smart TVs. YouTube plans to have Ultra HD videos on display at several television booths to demonstrate what can be done with a home system.

Technology You Can Wear

Wearable gadgets hit the scene big at the 2013 CES, and the 2014 show is expected to expand this technology into sunglasses, glasses and ski goggles. Will someone create a Google Glass killer before the technology really gets off the ground? We will have to see. Sweaters, handbags and smart clothing are also expected to be a big focus of the show. Smart watches and smart phone apps intended to encourage a healthier lifestyle will be displayed in their most recent incarnation.

Like all other CES shows you never really know what you are going to see until you get there. Let’s hope for some awesome.