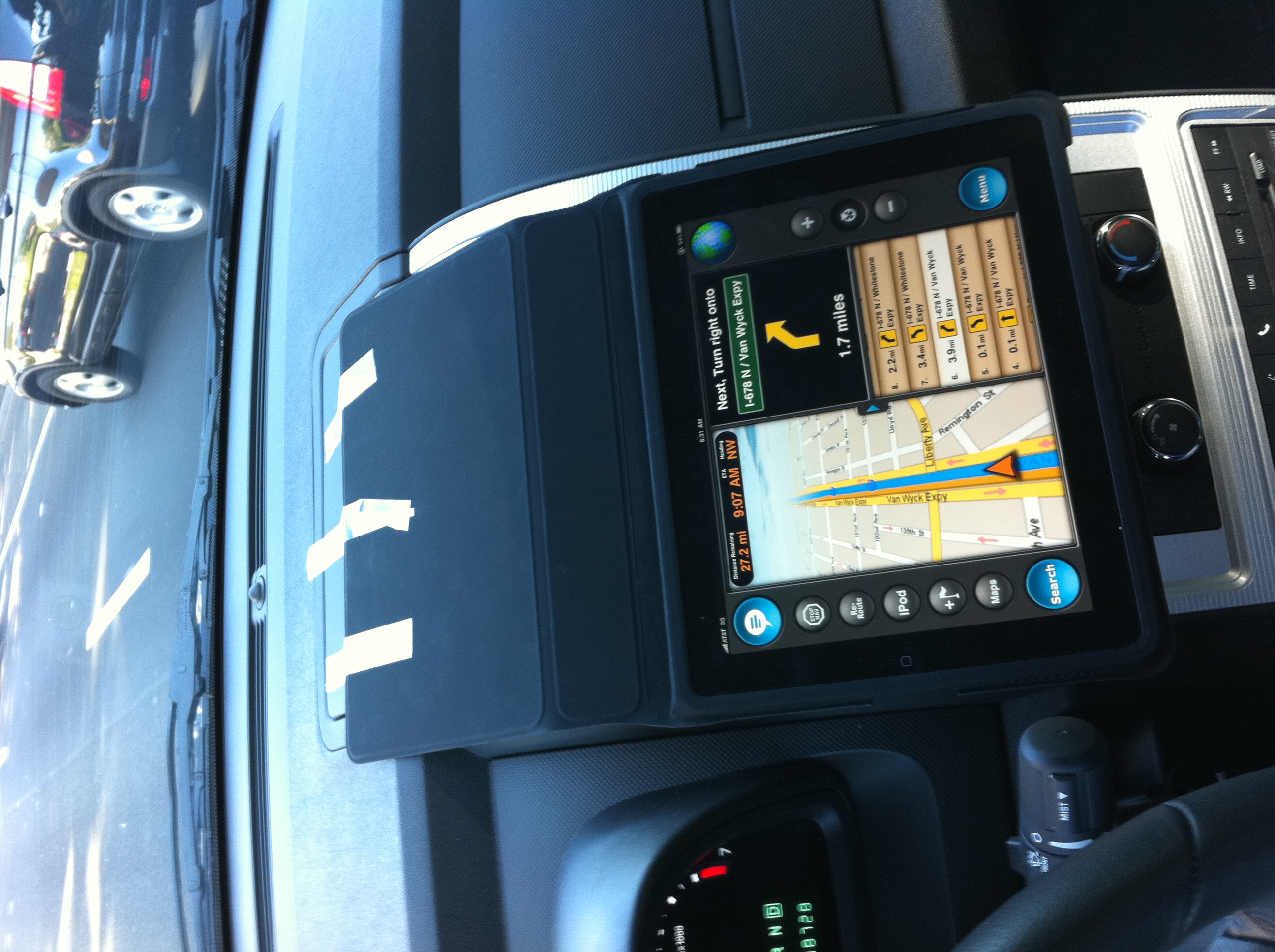 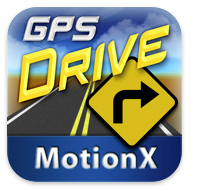 I do a good amount of traveling for my job, often to cities that require me to rent a car. In the past I have packed a Garmin portable GPS in my bag to avoid the daily fee charged by the rental companies. While the GPS itself wasn’t all that big or heavy it was another thing I had to pack, and made my computer bag even bulkier to lug around the airport.

When I purchased my iPad (aff link) I decided to see if there was an alternative. I did a search through the iTunes store and found a wide variety of GPS apps, some with expensive one time fees, others with monthly or yearly fees.

After some consideration I went with Motion X GPS Drive (yes, I am an iTunes affiliate as well) and I think made the right decision.

How I Use it

I place the iPad somewhere in the center console area. At first I was taping it to the dash to simulate the positioning of a built-in GPS unit, but found the GPS works just fine when positioned lower. It also looks less ghetto when you don’t use tape : ) The screen is big enough that you can see it when placed at a lower angle, and the voice navigation keeps you on track when you aren’t looking at the screen. 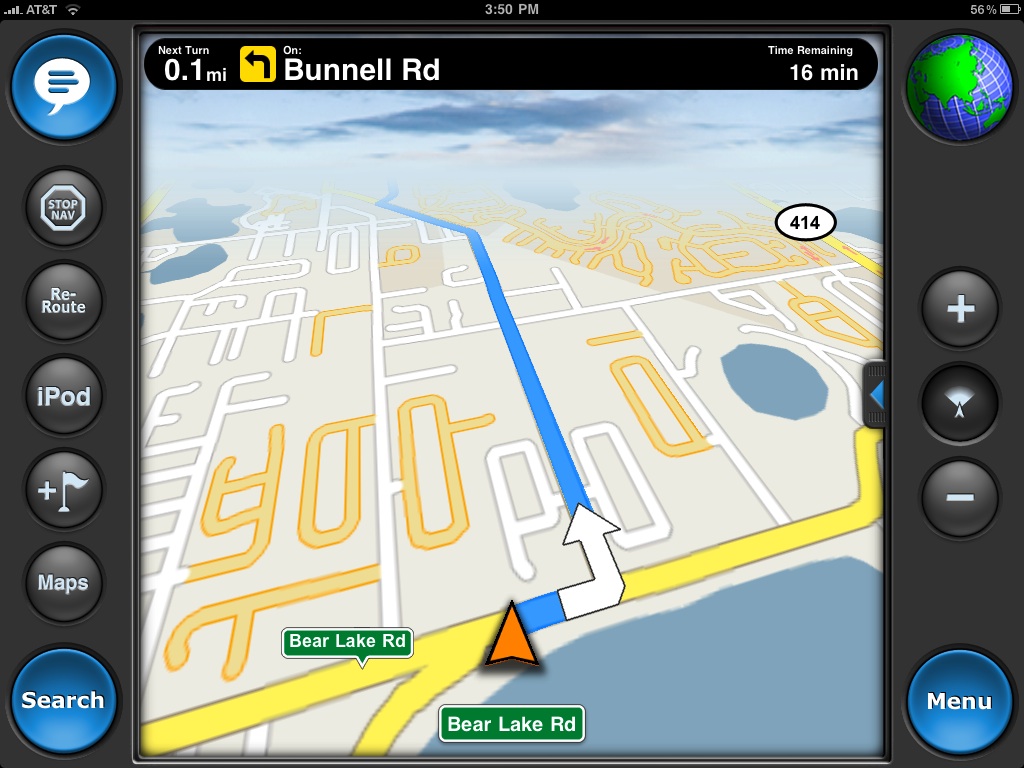 I like that I can get the same app for my iPhone and the iPad and that the interface is consistent. The UI is clean, easy to use and reasonably cool. I have found the directions to be spot on and the software is always able to find the location I am searching for (Internet permitting). 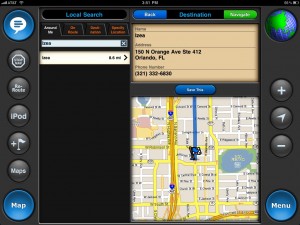 Apparently there is no built in map data. Every time you want to put in a location you need to have Internet access, which means it won’t work so well on the road for wifi-only iPad owners. Even though I have the iPad 3G I find this to be an issue at times because ATT cell service is so unreliable in big cities. Note that once you put in your destination you don’t seem to need Internet connectivity again while you are in route.

I wish that the software told you the name of the street you need to turn on, instead of a generic “turn in 500 feet”. It would also be nice if the recent and saved locations synced between my iPhone app and iPad app, since they are both authorized by the same account.

If you purchase the iPad app and iPhone app along with voice navigation you can only use voice navigation on one device at a time. This isn’t really a problem for me, but I could see it being an issue if you are sharing these devices.

I give Motion X GPS Drive 4/5 tongues. It is cheap to try (they give you a 30 day demo of the voice navigation for free) and provides 90% of the features I really need and care about. I just wish AT&T coverage was better. 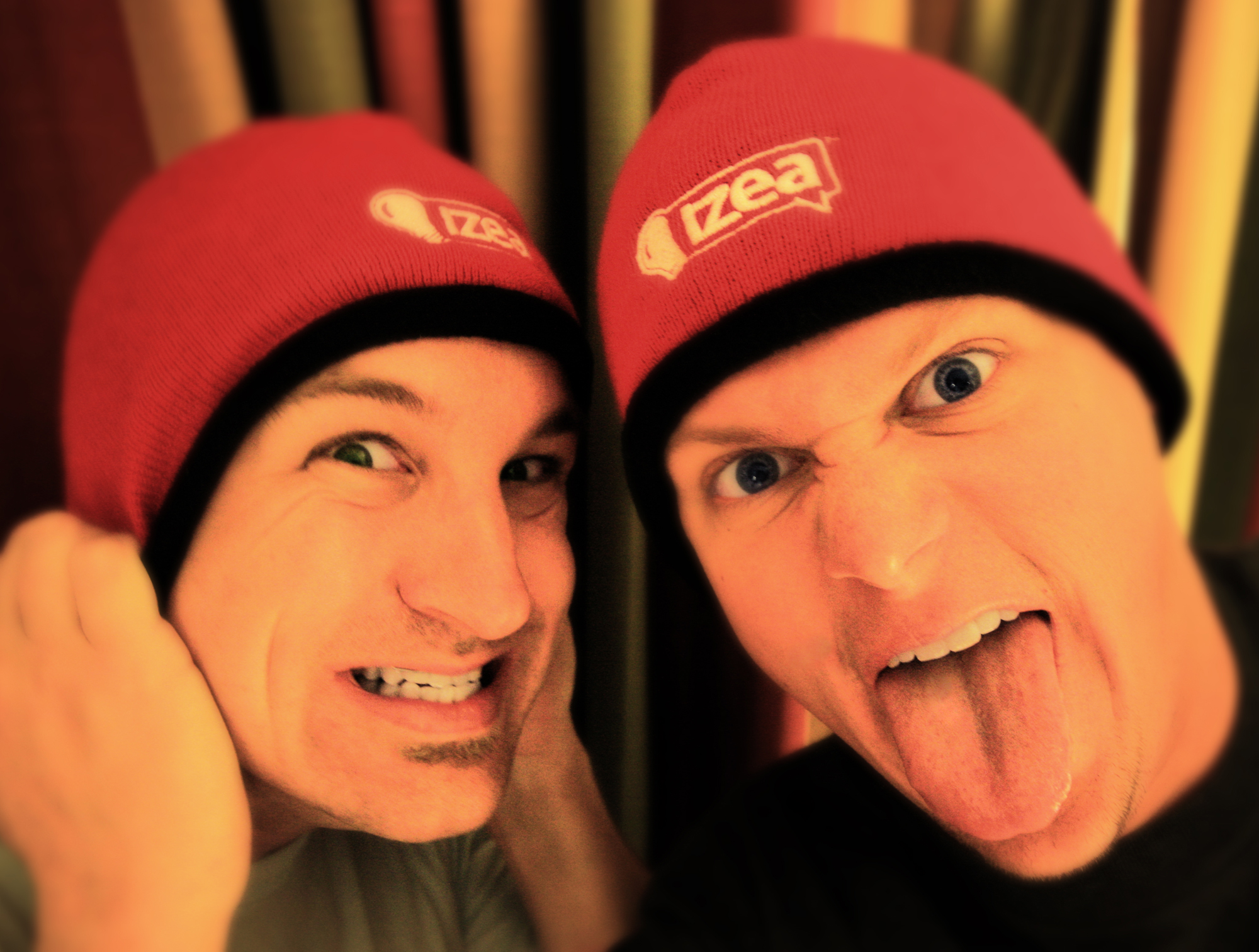 Love It or Leave It

Love It or Leave It