Despite my efforts to shrug the protests off, I continue to be irked by the #occupy movement. The image below is seared into my mind and while not representative of every protester’s thoughts it underscores some of the core message of “corporate greed” and “oppression of the 99%”. 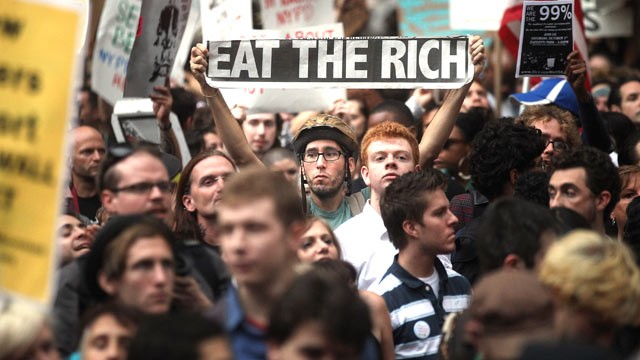 I would like to share a different point of view. I believe America’s ultra rich and successful are one of the greatest assets our country has. Contrary to popular belief only 20% of millionaires inherit their money, the remaining 80% are self-made millionaires. These are the people creating jobs. These are the people who build the things we can’t live without. I believe people like Gates, Buffet and the late Steve Jobs are more valuable than any oil field or gold reserve.

In the U.S. our rich (and aspiring rich) create wealth not only for themselves, but everyone they touch. They are a unique natural resource created by our capitalist society. I don’t want to eat the rich, I want meet them, learn from them, leverage their financial resources and become one of them.

Think about the companies that lead the world in innovation. Apple, Google, Microsoft, Facebook, Amazon, Intel, eBay. What do all these companies have in common? The entrepreneurs that created them were all backed by rich, successful people and the venture funds that they invest in. There is a tremendous trickle down effect that few people realize or acknowledge.

When I look at a company like eBay I am amazed by the magnitude of the trickle down effect. In 1997 eBay received $6.7million in venture capital from Benchmark Captial. At the time the company had $4.7million in revenue. No bank would have loaned them that much and raising that kind of money from family and friends would have been impossible. Without some smart, wealthy investors willing to place a very risky bet eBay would have never happened.

Who cares? Well… 17,700 employees care, not to mention the millions of users who will conduct over $10 billion in transactions this year. eBay has created a wealth of jobs both directly and indirectly and I for one am happy that the rich were there to fund it and help it grow.

The very tools that are funding the #occupy uprising are a direct result of investments made by the rich. Social platforms like Twitter and Facebook didn’t make a dime for years and would never have made it past their first couple of months without big money pouring in.

Yes, the rich get richer… but they take everyone else along for the ride.

History Was Made Today